Are Bagpipes Irish or Scottish? (We Look Into All Facts) 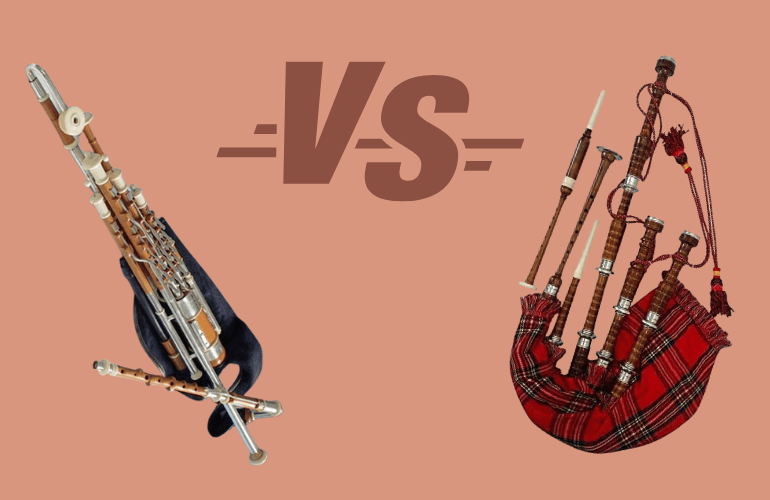 A Scottish bagpipe comes to mind when a person thinks about bagpipes.

It is due to the high popularity of the Scottish bagpipes.

What Are Scottish Bagpipes?

Scottish bagpipes are the most popular bagpipes in the world.

Great Highland Bagpipes are the most famous among the Scottish bagpipes.

You can see these bagpipes in the parades and gather in different countries.

You will hear bagpipes sound at many places in Scotland because it is part of the Scottish culture.

It is the musical instrument in the British National Army.

The people of Scotland used these bagpipes during army marches to motivate their soldiers and put fear in the hearts of enemies.

Historians found evidence of their use in the army in the 1400s.

They confirmed it with the help of artwork of the thirteenth century.

You will see these in movies and shows.

Due to its appearance in movies and shows, it gained popularity in different parts of the world.

There are different types of bagpipes in Scotland.

Some of them were available in the past. Most people use Highland Bagpipes these days.

We will discuss the features of the highland bagpipes due to their popularity.

It is a woodwind instrument because most parts of the Scottish bagpipes consist of wood material.

It uses wind to produce melodies.

There is a double-reed in the chanter part of the bagpipes to produce sound.

There are many other parts in the Scottish bagpipes.

It has a blowpipe to put air in the airbag.

There is an airbag to hold air and prevent note breaks.

Chanter controls the melody in the Scottish Bagpipes.

Drones are responsible for producing continuous sounds of the same frequency.

You should notice the airbag of the bagpipes when you view it from a distant location.

You can produce melodies with the bagpipe without breaks due to the air storage in an airbag.

The airbag acts as the air reservoir.

When you pause blowing air into the bagpipes, the airbag will supply air during this time.

Some call it the lungs of the bagpipes because they inflate and release air like lungs.

The latest designs use synthetic materials with more durability to make these airbags.

Airbags can accumulate moisture when you play the bagpipes for a long time.

It can increase the risk of fungal damage.

It is better to focus on airbag durability because it is one of the most expensive parts of the instrument.

The piper can control the airflow into the chanters and drones with the help of pressure on the bag.

The piper keeps the airbag on the inner part of his elbow.

He can push the bag with his elbow to increase air pressure to play different melodies.

The blowpipe is also known as the blowstick because it consists of wood material.

It is the part that goes to the mouth of the player.

You can use this part to push air into the bagpipes.

Having a blowpipe is a crucial aspect of the Scottish bagpipe.

There was an issue of air returning to the piper’s mouth.

This mechanism only allows air movement in one direction.

Once the air enters the airbag, it does not go back to the blowpipe.

You can practice blowing air for a long time to ensure you play the bagpipes without breaks.

Bagpipes have many drone pipes to produce continuous sounds.

Drones are similar to chanters as they create sound but do not have holes to change the sound frequency.

Drones have a particular location as they rest on the shoulder of the pipers.

One of these drones produces a deep sound.

It is known as the bass pipe.

The other two pipes are known as the tenor drone pipes.

The tenor produces a sound one note lower than the chanter pipes.

The bass drone pipe has sound two notes lower to give a deep sound.

The chanter is the part of the bagpipe responsible for producing melodies.

There is a reed in the chanter to produce sound.

It is another pipe attached to the airbag.

The chanter has a location on the opposite side of the blowpipe.

There are some finger holes on the chanter.

These finger holes allow you to control the frequency of the sound.

Most Scottish bagpipe chanters use blackwood to enhance their durability.

You cannot control the volume of the sound coming out of the chanter in the Scottish bagpipes.

What Are Irish Bagpipes?

Irish bagpipes are native to Ireland.

The working mechanism of the Irish Bagpipes is similar to the Scottish ones.

There are a few differences between them.

Irish Bagpipes are also known as the Uilleann bagpipes due to the bellows.

A piper pushes air into the bagpipes’ airbag with the bellow mechanism’s help.

There is no need to use your lungs to push air into the Irish Bagpipes.

You may also find them in the market by the name Union Pipes.

They got this name due to their contribution to British unification.

Irish bagpipes have many features not available in Scottish Bagpipes.

It is due to different mechanisms of air entry and tone production.

You will also see different parts of the Irish Bagpipes.

The details of the Irish Bagpipes features are on the list below.

It has a similar function to the Scottish bagpipes chanter, as you can control sound frequency by closing different holes on the chanter.

There are some differences in the Irish Bagpipe chanter also.

You can play more than one octave with the help of Irish bagpipes chanter.

You can look for the difference when seeing the chanter’s bore because it is cylindrical.

Playing this chanter in indoor settings is better because it produces a sweet sound.

Bellows are the special part of the Irish Bagpipes that make them different from the Scottish ones.

A piper uses a bellows mechanism to push air into the Irish Bagpipes.

He can keep this part under his elbow to use the force from the arm to push the air.

He can start by moving his elbow to fill the airbag of the Irish Bagpipes.

Once full, he can use a chanter to play the melodies.

Once the air gets low in the airbag, he can push his elbow to supply more air to the Irish Bagpipes.

There is no need for a large bag in the Irish bagpipes because pipes do not need to take a break for breathing.

You do not get regulators in the Scottish bagpipes.

There are three regulators in the Irish Bagpipes.

These regulators are similar to the chanters because you can control their sound with the help of your hand movements.

You can keep the regulators on your lap while playing these bagpipes.

An expert piper can control the regulators to produce better melodies with the Irish bagpipes.

These melodies are only possible to produce with the help of regulators.

You cannot control the sound and volume of the Scottish Bagpipes.

It is due to the loud sound of the drones.

It is not the case with the Irish Bagpipes because you can control the drone sound.

You can also turn them off if you like.

A switch on these bagpipes allows pipers to turn the drone sound off.

There is no need to hold the drones above your shoulders in the Irish bagpipes.

You can sit while playing these bagpipes.

There are three drones in the Irish bagpipes.

Two of these drones are baritone.

One of them is the bass drone.

Scottish bagpipes have many advantages that make them more popular.

One of the reasons for its popularity is the high pitch sound it produces.

Some people prefer to play the Irish bagpipes because they want to sit while playing the bagpipes.

Others prefer it due to its sweet sound.

We have compiled a list of advantages and disadvantages of Irish and Scottish bagpipes.

These differences will help you choose the one best according to your demands.

Similarities Between Irish and Scottish Bagpipes

Differences Between Irish and Scottish Bagpipes

Are Bagpipes and Kilts Scottish or Irish?

Most experts believe Bagpipes and Kilts are Scottish because many pipers wear them in Scotland while they are standing.

The people of Scotland incorporated the Kilts into their culture better than the Irish people.

People of Scotland have been wearing the Kilts longer than the Irish people.

You can see pictures and the history of Kilts in Ireland after the 1850s.

There is evidence of Kilts in Scotland before this date.

There is no way to know for sure because some historical events are not documented.

It is hard to gather all the details for a solid answer.

We can say there is a high probability of Kilts being Scottish.

Are Bagpipes Part of the Irish Culture?

Yes, Bagpipes are part of the Irish culture.

There are many ways to know if they are part of Irish culture.

You can find the bagpipes in the ceremonies of the Irish people.

Great Highland Pipes were part of many wars of the Irish people.

You can also hear the bagpipes when you are in Ireland.

Pipers are playing them in the historical places of Ireland.

Several ceremonies and weddings of Irish people are incomplete without playing bagpipes.

Did Ireland Have Bagpipes before Scotland?

If you look at the history of Bagpipes, you will find them in ancient Egypt for the first time.

Romans picked the bagpipe’s design from the Egyptians, and they bought it with them when they invaded Scotland.

The people of Scotland saw the bagpipes before the Irish people.

They think Irish people took the bagpipes to Scotland when they moved there.

It is a question similar to this: Are bagpipes Irish or Scottish? There is less evidence for this claim as most people believe the Bagpipes came to Scotland before Ireland.