Where Did Bagpipes Originate? (YOU WILL BE SURPRISED)

Are Bagpipes Hard to Play (PROBABLY, But Read This)

Bagpipe Maintenance: How to Take Care of Your Bagpipes

How to Clean Bagpipes Guide? (Sterilize Your Bagpipe Components)

Who Played Bagpipes for AC/DC? (ANSWERED)

How to Hold Bagpipes? (THERE Is a Right Way)

How to Make Bagpipes Out of a Rubber Glove? (TRY THIS) 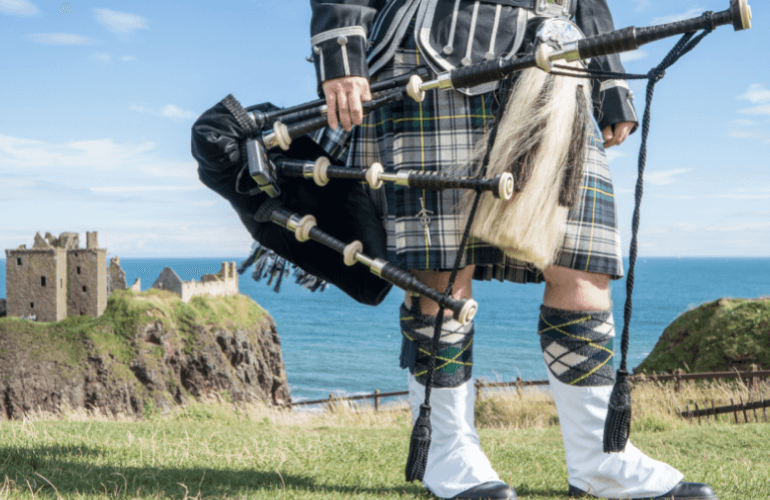 Bagpipes are one of the musical instruments that you can play without pause.

It can produce a particular sound that you can hear from miles away.

Modern artists have changed this instrument by adding valves to prevent air leakage and material improvement.

The mechanism of playing the bagpipes has been the same for centuries.

Most people do not know where did bagpipes originate.

We will provide details of the bagpipe’s origin as it has roots extending thousands of years.

Bagpipes History: Where Did Bagpipes Originate?

Contrary to the belief of most people, Scotland is not the birthplace of the bagpipes.

The people of Scotland incorporated this musical instrument into their culture.

This instrument came to Scotland from the Romans.

Romans took it from Egypt to use it on different occasions.

When the Romans attacked Scotland, they brought bagpipes with them.

Although Romans use this musical instrument often, there are fewer signs of cultural incorporation.

No one respected the bagpipes as the Scottish people did.

The history of bagpipes is incomplete without mentioning the Egypt, Romans, and Scottish people.

Related Article: What Are Bagpipes Made Of?

When Were Bagpipes Invented?

No one knows when the bagpipes came into existence as people discovered their origin from the Hittite carvings from 1000 BC.

The Hittite civilization consisted of the Indo-European people.

They moved to Asia and formed an ancient civilization.

It is one of the oldest advanced civilizations because it started in 1600 BC.

They used advanced equipment to do things.

Bagpipes are one of their advanced creations.

Some believe that people used bagpipes even before these people.

Most experts believe that ancient Egypt is the birthplace of the bagpipes.

Related Article: How Much Do Bagpipes Cost?

Who Invented the Bagpipes?

We cannot give the name of a person who invented this musical instrument as it has been around for centuries.

Every civilization used this instrument for different purposes.

We have the oldest records of ancient Egypt and other ancient civilizations.

There is evidence of all civilizations using this musical instrument.

Egyptians used it to play the melodies for the people.

Many other civilizations used it the same way.

The use changed when it reached the Romans.

They used it as the musical instrument of war.

This tradition continued in Scotland also.

When the Scottish people went to battle, they played the bagpipes.

Most monarchs had a personal bagpipe player for the war.

People knew the troops were coming when they heard the bagpipes.

Related Article: How Do Bagpipes Work?

How Old Are Bagpipes?

Bagpipes are more than 3600 years old.

Experts found evidence of the bagpipes in the Hittite organization.

There were some carvings of a man playing the instrument with a bag.

Hittite organization dates back to 1600 BC.

More than 2000 years have passed since Christ.

There are some weaker pieces of evidence from ancient Egypt also.

It is hard to pinpoint the date of bagpipe origin.

We can give an idea that they might have originated before 3000 to 5000 years.

Older bagpipes were not as advanced.

They only had one chanter in the old times.

Related Article: Everything You Should Know about Uilleann Pipes

How Did Bagpipes Get to Scotland?

Romans brought the bagpipes to Scotland during the battles.

Romans started a campaign to attack Scotland in 40 A.D.

The Scottish people resisted the attack.

They could not continue the rule as the Scottish people were good at resistance.

Roman used bagpipes when they went to battle.

They used one drone and chanter at the start.

Scottish people improvised it as they added more drone pipes.

They also added the longest drone pipe to produce the deep sound.

This sound was responsible for putting fear in the heart of the enemies.

Romans were explorers as they collected items from all over the world.

They took this musical instrument from the Egyptian people.

Some people believe that the bagpipes went from the Romans to the Irish people first.

The Irish people brought it to Scotland.

Regardless of the origin of the bagpipes, Scottish people gave the most respect to this musical instrument.

How Old Are Scottish Bagpipes?

These are also known as the great highland bagpipes.

Most people used the older bagpipes in the British army.

It only had one chanter and a drone.

Scottish bagpipes have more than one drone pipe.

It is easy to identify because of the longer drone pipe.

The sound of the Scottish bagpipes is also different.

Scottish people added the bass pipe to this musical instrument.

It is the longest pipe with a deeper sound.

It is an advanced version of the great Irish war pipes.

Related Article: How to Make Bagpipes Out of a Rubber Glove?

Where Did Scottish Bagpipes Originate?

The Scottish bagpipes originated from the Romans attacking the Scottland.

It was a product of war.

Most people believe that the Scottish wars were devastating and nothing beneficial came from this war.

The bagpipes are a product of the war.

It was also known as the war pipes.

Every country made its war pipes differently, as the Irish people made the Great Irish war pipes.

Scottish highland war pipes are the specialized version of the bagpipes of the Scottland.

The idea of the bagpipes does not have its origin in the Scottland.

It is an old idea from ancient civilizations.

Related Article: Why Are Bagpipes Played at Funerals?

Bagpipes and Kilts Are Often Associated with What Country?

Bagpipes and Kilts are associated with the Scottland.

Other countries also have some resembling traditions because Irish people often use bagpipes and kilts.

It is not a widespread tradition in the country.

You will find bagpipes and related items in all the traditional places of Scottland.

When you search for the country with the most bagpipe traditions, Scottland holds the top position.

Scottish kilts are also peculiar because of their red and green color.

You will not find the Kilts with check designs in other countries.

Scotland has kept this tradition alive for centuries.