Why Are Bagpipes Played at Funerals? (SOLVED)

Are Bagpipes Hard to Play (PROBABLY, But Read This)

Bagpipe Maintenance: How to Take Care of Your Bagpipes

How to Clean Bagpipes Guide? (Sterilize Your Bagpipe Components)

Who Played Bagpipes for AC/DC? (ANSWERED)

How to Hold Bagpipes? (THERE Is a Right Way)

How to Make Bagpipes Out of a Rubber Glove? (TRY THIS) 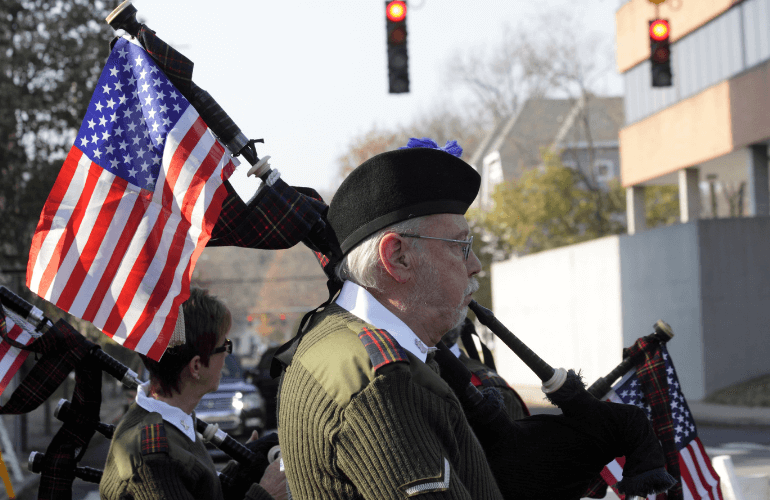 Bagpipes are one of the unique musical equipment without a note-break.

People can hear its melody from miles away.

Many of us often wonder why are bagpipes played at funerals.

Apart from telling people about the honorable person, there are many other reasons for playing it at the funeral.

We will discuss some of the reasons in this article.

When Are Bagpipes Played at Funerals?

Bagpipes are played at the funeral when someone dies helping others. It is also a tradition to play the bagpipes at the Scottish and Irish funerals to give regard to the deceased.

It is played at the funerals of the army officials, police officers, and firefighters when they die protecting others.

As the sound of this musical equipment is heard from miles away, people will know that someone has died on the job of protecting others.

It is a perfect way to tell people that someone important to the community has sacrificed his life for others.

People also play the bagpipes when they want to give respect to the deceased.

There is no limitation for playing the bagpipes at someone’s funeral.

You can arrange the bagpipes at the funeral as many pipers provide these services.

Related Article: What Are Bagpipes Made Of?

What Song Do Bagpipes Play at Funerals?

The songs played at the funeral have a peculiar tone as it appears that someone is mounting from the far.

Going home is famous because it was played for the firefighters and the police officers who died on the 9-11.

These songs allow people to express their deep sorrows as they have a mournful melody.

It will become easy for people to share their grief at the funeral when these songs are played.

When you play the “Flowers of the first,” it eases the mourning because the melody shift from the traditional music to a mourning sound.

People also play “Danny Boy” because it is for a person left behind by someone he loved.

Related Article: Where Did Bagpipes Originate?

What Is the Significance of the Bagpipes Played at a Funeral?

Most funeral songs of the bagpipes have different meanings. It was played in the Scottish wars at first.

When they played Going Home, it informed all soldiers that no matter where they die, they will go home to Scottland.

It also has significance because it tells people from miles away about the death of a significant person.

Related Article: How to Play Bagpipes?

Why Do Cops and Firefighters Play Bagpipes at a Funeral?

More than 60 uniformed members of the force come to play bagpipes at the funeral of cops and firefighters because of the 150 years old tradition.

Many Irish people came to America during the 1800s because of famine. It was hard for them to get a job.

They got jobs in the most dangerous places.

Most of the firefighters at that time were Irish due to this reason.

Whenever a firefighter died, his colleagues arranged a funeral with bagpipes.

It became a tradition for all the firefighters at first.

When the police department saw the significance of the bagpipes at funerals, they also made it a tradition for their department.

Related Article: How Much Do Bagpipes Cost?

Are Bagpipes Appropriate for a Funeral?

Bagpipes are appropriate for the funeral because this musical instrument plays a mournful sound. It becomes easy for people to express their feelings when a mournful melody is being played. It is also appropriate due to the traditional significance.

Bagpipes have been played at the funerals for hundreds of years.

We can claim some are inappropriate if it irritates or alienates someone.

Bagpipes do the opposite as they provide comfort to the deceased’s family.

It is also a tool to pay respect to a person at his funeral.

There is nothing inappropriate about the bagpipes at the funeral.

Related Article: How Do Bagpipes Work?

When Did Bagpipes Start Being Used at Funerals?

Scottish and Irish people have been using the bagpipes at the funerals since the bagpipes came to them during the wars in the 1500s.

It was an instrument of war at that time.

No one was allowed to carry the bagpipes except during the battle.

They also played bagpipes for the soldiers after their death.

Scottish and Irish people play the bagpipes at the funeral of every respected person.

This tradition came to America when most firefighters were Irish in the 1800s.

It has become a standard to play the bagpipes at all the funerals of the people who died in dangerous jobs.

People also play bagpipes at the funeral of social workers as they are leaving this world helping others.

Related Article: Uilleann Pipes: Everything You Should Know

At What Other Events Are Bagpipes Played?

Bagpipes have evolved much more than musical instruments because of their long history.

It was an instrument of war in the past. It was used to put fears in the hearts of the enemies.

It became an instrument to pay respect after some time.

Now, it is part of many cultures as people use it for entertainment also.

Most Scottish and Irish people play the bagpipes at weddings due to their cultural significance.

Some people hire expert pipers for the family feasts to entertain people.

The most common place you will see the bagpipes is the award-presenting ceremonies of the police and firefighters.

They play the bagpipes also at the graduation ceremonies of the new trainees.

People also play bagpipes to attract the attention of people.

Many countries play bagpipes in their flag-raising ceremonies.